Damar Hamlin and the Media Surrounding his Freak Accident 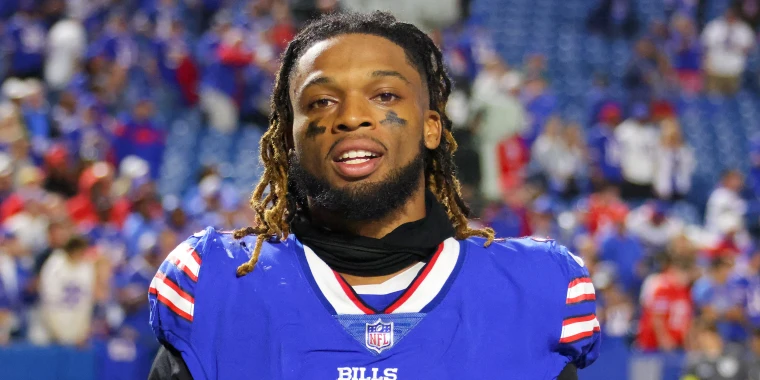 [Damar Hamlin pictured before his accident in his Bills’ joursey.]

During the first quarter of the Bills vs. Bengals Sunday Night Football game on January 2nd, fans and players alike witnessed one of the scariest moments the NFL has ever seen. Bills safety Damar Hamlin collapsed on the field after a hit to the chest from Bengals wide receiver Tee Higgins. Initially, Hamlin popped up after the hit, but a few seconds later he fell to the ground, leading to medical personnel rushing onto the field. After a few delays and commercial breaks, it became apparent that something was seriously wrong. Even with major injuries in the NFL, like a torn ACL or compound fracture, the player usually indicates to the crowd that they are okay, and the game continues.

This was not the case. Bills players could be seen sobbing for their fallen teammate, and players from both teams kneeled on the field with shocked looks stuck on their faces. Eventually it became apparent to viewers that medics were forced to perform CPR and use an AED to restart Hamlin’s heart. Once Hamlin was resuscitated, he left in an ambulance with his family to the University of Cincinnati Medical Center in critical condition; he was subsequently placed in the ICU. Hamlin’s freak accident is unprecedented in regards to professional football, and it has caused an uproar in the media.

Thankfully, there have been many positive developments surrounding the incident, with the NFL community coming together in support of Hamlin and his annual toy drive. The drive set out with a goal to raise $2,500, and the final total amount has now exceeded $6,000,000. It is a fantastic scene, as players and fans alike have come together to support a man who has proved to be elite on and off the field. Former players, including Ryan Clark and Marcus Spears, have stepped up and provided insight in regard to the situation. Clark had a health scare of his own following a game he played in Colorado, where he suffered a splenic infarction leaving him hospitalized for a month. The infraction was induced in part by the sickle cell trait which Clark possesses, and almost resulted in his death. Clark has continued to urge fans to take it easy on NFL players, and think again before calling out their favorite fantasy player for a poor performance. After all, these players put their lives on the line, which is a humane aspect of football that is easily forgotten.

Unfortunately, all of the discussion surrounding Hamlin’s incident is not trustworthy or positive. There have been multiple reports published linking the Covid-19 vaccine as the result of the cardiac arrest which Hamlin suffered on the field. While these reports have been disproven on multiple accounts, they shed light on a larger issue with the media: fake news. No matter what the true cause of Hamlin’s accident turns out to be, the real issue of concern is his well-being and recovery. Fortunately, there have been signs of progress in regard to his condition. Hamlin is now awake, and has communicated through writing and speech. He was able to call his Buffalo Bills teammates, where he told them “I love you boys.” Our thoughts and prayers are with Hamlin as he recovers from his condition, and continues to regain his former status.